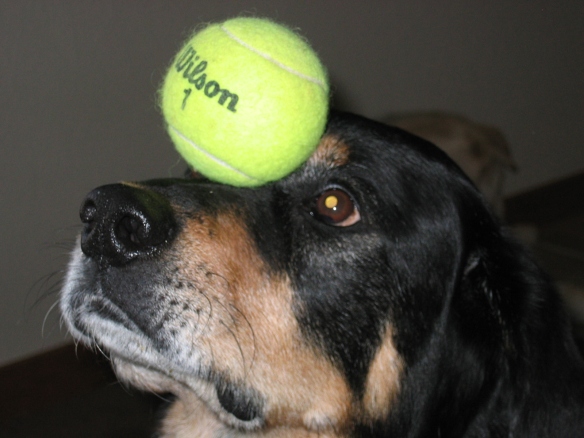 Addie with her favorite toy

On March 5th, Addie had a nice sized growth removed.  She was doing pretty well recovering, but somehow the night of March 9th she proceeded to pull all 5 of her stitches out!  I didn’t hear her get up in the night, and she was wearing her shirt, but somehow she managed. Of course March 10th was a Sunday, so no Dr. appointment that day!

The wound wasn’t bleeding, but we felt we needed to keep a gauze pad on it anyways.  With it being high on her back leg, it was near impossible to wrap it.  We tried 15 times without success.  In the end, duct tape worked!  I know.. not a great visual, but it kept the pad on for the day!

Since we needed to take her in to the vet on Monday, we also decided to try another shot of Legend to see if this one would help whereas the last one did not.

At the appointment, Dr. Mario said that her incision was healing nicely and he did not need to re-stitch the wound.  Yeah!  He then proceeded with the additional dose of Legend.

I am happy to report that the wound is almost entirely healed now.  Not sure how that happened as Addie tends to take forever to heal from things, but it looks great now.  AND she has been walking MUCH better the past several days.  She is excited to go on her walks in the morning and wants to go longer than normal.

Also, I am not sure if I had mentioned earlier, but she had a skin condition she was fighting as well, and that is 85% corrected.  We still are giving her medicated baths every 2-3 days and I suspect within the week she should be good to go.  Good news all around today!

We never know what each day will bring for Addie, but we just take one thing at a time and do the best we can.  Her quality of life is still good, so what more can we ask for? 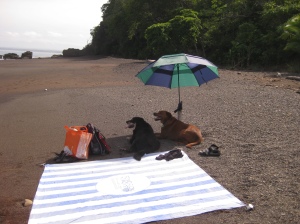 We obviously don’t post as much as we used to… but as always, no news is pretty good news.

The Legend seems to continue to work. I am not sure if it is all about that, but Addie seems to really want to get out, play, and be more involved with things.  Last week, she played ball for a good 15 minutes and today she wanted to go on a walk.

It is funny as those were pretty normal things for her even a year ago.  But age has seemed to really catch up with her and she sleeps most of the time.  It wasn’t that long ago when she was doing 6+ hour hikes with us up mountains in Colorado.  But she is 14 1/2 and we are just happy that she seems to be happier and wagging her tail more lately.

Today on our walk I enjoyed it more than I recall enjoying it over the past few years.  It was just her and I walking up the road.  We went at her pace, stopped to smell whatever was near and just enjoyed the great outdoors.  We didn’t go very far, but I felt happy to just have that time with her and let her experience the things she used to love to do. 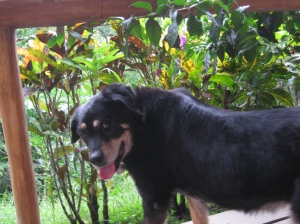 Addie enjoying the fresh Costa Rican air from our deck

Honestly, I was not optimistic about Legend.  Certainly I wanted it to work, but I felt that her issue wasn’t 100% with her hips but something else.  Not sure why but I just “felt” that way.

She received the Legend injection on Thursday afternoon.  We had given her pain meds that morning as she was still feeling bad.  Friday came and we could tell she still wasn’t feeling well.  We picked up more pain meds – enough for 4 days and gave her another dosage.  She was walking better, but nothing astounding.

Saturday came and she seemed to be feeling better, so no pain meds.  But she wasn’t as good as we had hoped.

Sunday morning though seemed to be the day.  She was much more alert and energetic and moving around much better.  We had talked about meeting some friends who were visiting from out of the country Sunday and she looked good enough that we felt we could leave her home for a few hours.  When we returned she jogged to the door to see us and looked like she was feeling pretty darn good!

Since Sunday, she has had a little more pep in her step 🙂  She now strolls around the yard more than she has for the past month.  She is eating well (which has never really been a problem for her), and she even wants to play a little with her toys.

So at this point, I am almost convinced that it was all in her hips.  The Legend is supposed to help her for a good 3-4 months before she needs another injection so we will just wait and see how she does.

She definitely is our little Energizer pup!

Neoplasene is omitted for 7 days at every 6 week interval

* Switched to plain (primarily goat based) yogurt in Jan, 2012

** SAM-e and Shu Gan added, and Hepagen-C
doubled to present level in October of 2011 because of blood tests indicating liver trouble